“I’ve never really looked at losing my leg as a handicap, just more of an inconvenience. A lot of people have inconveniences.”

What a fitting honor that this year’s Insight 2004 Race Across America is dedicated to two time Purple Heart recipient and retired US Marine corporal, Jim Penseyres (56) of Rainbow, CA.

Jim’s story is truly an inspired one. In 1968, during the last month of his rotation in Vietnam, Jim stepped on a landmine and lost his left leg four inches below the knee.

“Actually, I was very relieved that I wasn’t dead. After spending six months in the Oakland Naval Hospital I was eager to pick up where I had left off. I had enjoyed surfing and was looking forward to being able to do that again, which I did for several years before taking up cycling. I’ve never really looked at losing my leg as a handicap, just more of an inconvenience. A lot of people have inconveniences. For me it was just a question of what I could do rather than a question of what I couldn’t do.”

In 1985, Jim crossed the US in his first RAAM in less than 12 days. He repeated the feat in ’87 in less than 11.5 days, and again in ’90 in 10 days, 17 hours. In between, in ’89, he joined forces with his brother and RAAM legend, Pete Penseyres and two others to form Team Lightning, a human powered vehicle team using fully faired recumbent bikes. They tore up the course in 5 days, 1 hour at a staggering and unequaled average speed of 24.1 mph.

“My preparation for the ’85 and ’87 RAAMs were mostly commuting back and forth to work. I lived 38 miles away, one way, which gave me a great base. With weekend rides and a few USCF races, my mileage averaged about 400 miles per week during the winter. Six weeks prior to RAAM I raised my mileage and intensity, which brought my mileage to between 800 and 900 miles per week in the last two weeks before RAAM. One technique that Pete and I used to pile on the miles while working 40 hours per week, was to ride overnight. In talking with other cyclists who are still doing the solo part of RAAM, I found that they do not train by riding overnight. I’m not sure if that is a mistake on their part. As anybody knows, drinking and eating habits change from daytime to nighttime. I felt that getting used to those changes and knowing how my body was going to react was beneficial. Fortunately, Pete and I trained with each other to help keep us motivated and for what we needed to be doing. We would leave work and ride until dark where our wives would meet us, then follow along in the van. We would ride through the southern California desert all night, into and through the next day to finish that evening with about 400 miles. The hardest part was convincing our wives this would be ‘fun’. And, yes, we both have a lot of ‘you-owe-me-for-this-one’ to our wives. With all the RAAMs Pete and I have done, we’ll probably never be able to pay them back.” 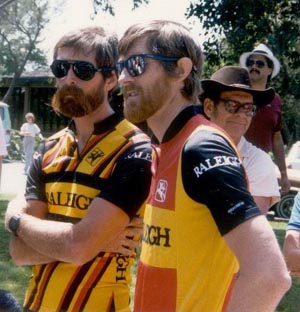 One might wonder what kinds of considerations Jim had to make in riding because of the loss of part of his leg, but “because I had ridden so many years before doing RAAM, I didn’t really have to make any special arrangements or adjustments either to myself or to my bike. I had ridden between 18,000-24,000 miles a year for about four years prior to RAAM, so a lot of the problems had already been resolved. But, when I first started cycling I had a lot of skin breakdown on my stump – sores that wouldn’t heal, etc. So I learned to make modifications to the prosthesis myself to help alleviate pressure spots. Plus miles of riding toughened the residual limb. We did experiment with several things with some success. We had a prosthesis built with a solid, non-flexing foot. The thought was that the transfer of power to the pedal would be more efficient. This was in the early 80’s, before wattmeters were used to give feedback on power transmission so it was difficult to determine if it was of any benefit. One thing that it did do was raise my left cheek off the saddle, which made me rock back and forth on the seat, creating another problem – saddle sores. So we tried shortening the prosthesis hoping to smooth out the pedal stroke and alleviate the rocking. It helped some, but because the ankle wouldn’t flex and the leg was shorter, I couldn’t walk on the darn thing. We tried using shorter crank arms on the left side with limited success. But in the end I went back to a stock, standard bike which seemed to work just fine for the last couple of RAAMs that I rode.”

Racing a bike and surfing may be totally different sports, but sometimes they can be more related than they appear. “It was the 87′ RAAM. I was riding just outside of Maryland in a huge rainstorm. I went down a long fast descent and came to a bridge that had about 6-8 inches of standing water. As I looked ahead I saw an 18-wheeler coming towards me in the opposite lane and realized that we would both reach the bridge at the same time. The truck created a large wave of water, which arched over my lane. I ducked my head and braced myself for the impact that seemed imminent. My crew hit their brakes and braced for the worst. The wake of water that the truck threw was so large that I actually rode through the center of it. It was just like being ‘tubed’. The crew said it looked like I just disappeared into the water because they couldn’t see me. I think they thought that I had either been blown off the bridge or had fallen and was still hydroplaning down the road. A couple of seconds later they were relieved when they heard over the speaker a loud ‘YAHOOOOO’. I couldn’t believe that I made it through it. What a ride!!!”

These days Jim spends his time with his wife of 35 years, Diane. They have one daughter and two grandchildren. He has an AA, BA and MA in art and works as a self-employed cabinetmaker. He doesn’t ride ultras anymore but might like to do another team RAAM. “A few years ago I set up an all-amputee team, but our sponsorship fell through. I’d still love to pursue that.” Considering that Jim is a seriously determined, you might just see him again on the RAAM route sometime.