“I live where I breathe, but I do most of my sleeping in Port Orange, FL.”

Rob Kish is without question the most accomplished ultra cyclist on the planet. Can any of us imagine riding RAAM 17 times in succession without a single DNF, winning it three times, setting and still holding the RAAM record time of 8 days 3 hours, and finishing on the podium countless times?? Rob did more than imagine it. He set the standard for all RAAMsters. It’s appropriate that Rob was voted Ultra Cyclist of the Year for 2003 by the readers of UltraCycling and Tailwinds magazines

The Ultracycling Hall of Fame honors those riders whose lifetime accomplishments best exemplify the spirit of the sport. The honoree is an excellent rider, demonstrates consideration for and helpfulness of other riders, and is an exemplar of the sport. In addition to cycling accomplishments, a person’s leadership in the sport, and participation in officiating, crewing and coaching activities are considered.

Many riders have won RAAM and Rob has raced against nearly all of them. He’s waged some of the epic battles of RAAM with all the other great RAAM champions, trading the lead back and forth the entire width of the country with Fourney, keeping Tatrai at bay as Tatrai stormed his way up from the back of the field, exchanging yearly wins with Chew, trying to catch Fasching. 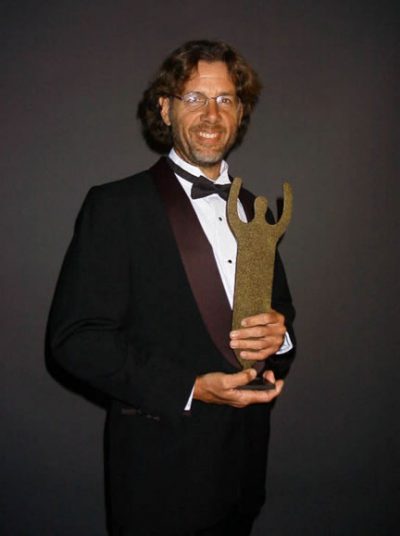 With him, as the consummate crew chief of every RAAM is Rob’s wife, Brenda. She has been Rob’s constant pillar of support. Together, they have the knack of finding the most dedicated people to add to their “Kish Krew” each year. Dave Olds has Krewed as electrical engineer for 11 consecutive races starting in 1988. Kelly Wood has Krewed as the official “domestic RV goddess” for nine crossings: “Rob is a great role model for other cyclists. It’s impressed me that, no matter what, he always finishes. During the race, Rob wants to make sure that the Krew is having fun, too.”

Rob’s accomplishments amaze another RAAM legend, Lon Haldeman: “The most remarkable thing about Rob is his durability. To ride 17 RAAMs without a DNF is incredible. He consistently finishes near the front. He never took it easy just to finish before the cut-off time.”

Most people see Rob as a quiet and private person. Not many people know that he has an incredible sense of humor. In the following interview, his humor shines brightly.

UltraCycling: Where do you work and what do you do?

Rob Kish: For 28.17 years I have surveyed land for the city of Daytona Beach

RK: As many of us, I have one. My sibling count could be considered excessive at eight.

UC: What is your educational background?

RK: Brenda and I both stole our junior college certificates in one year. We both had a nasty habit of only showing up to class only on test days. It was then that I developed my only addiction – Brenda. As I my dependence for Brenda developed further the combination of new habits led to our dropping out of senior college the next year.

RK: I hate to utter the number. It seems to change every year. Still each year I wear my age on my sleeve. I do seem to recall that I was 39 for some 14 years or so. Lately I’ve been feeling a little older than that.

UC: Where do you live?

RK: I live where I breathe, but I do most of my sleeping in Port Orange, FL.

UC: How long have you been riding ultras?

RK: As a teenager I used to ride 60 to 100 miles on a one speed with coaster brakes. In ’82, Brenda replaced our retired single speed beach rental tandem for a 12 speed and we rode it to Niagara Falls. That was the start of things to come.

UC: Can you talk about your training?

RK: In the off season I do a flat 200-300 miles and 500 mile weeks in RAAM prep. As interval training I like to mix in a 40 hour work week. In addition to toughening me up for RAAM, it makes RAAM a little more affordable, but not much. For three years I imported RAAM’s Mark Patten as a training aid, but that eventually failed when he whined too much as I, the king of the castle, tried to control the TV, except when we watched Teletubbies.

“The cross I must bear is the cost of RAAM. It’s training me for a vow of poverty.” 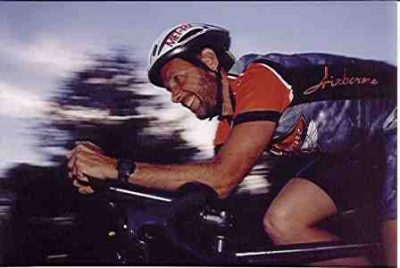 RK: I suppose the cross I must bear is the cost of RAAM. It’s training me for a vow of poverty.

UC: How about sponsors?

RK: Airborne Bikes and Hutchinson Tires, product only, of course.

UC: Every year you say this is your last RAAM. What keeps you coming back?

RK: Each year Brenda takes me on a wonderful bike/RV vacation. She does the driving. Sometimes she even lets me bring some friends. The catch is that when we get to the west coast she makes me ride all the way back. If I do it fast enough and without too much complaining, she won’t leave me behind.

UC: What do you have that allows you to withstand the rigors of ultra riding?

RK: Mostly a great Krew chief. Also, I have a short memory.

UC: How do you overcome the difficulties of RAAM during the race.

RK: I don’t remember overcoming anything. I have passed and been passed by other riders, but it was more about a temporary overtaking than permanent overcoming. The vehicles are always breaking down, but somebody else always overcomes those difficulties.

UC: Do you have any goals left in racing?

RK: It might be nice to win one more RAAM, but one more sub-9 day would be more reasonable.

UC: How many more RAAMs will you race?

RK: These days, the last guy to sign up usually wins, so I’ll say zero . . . if I can sign up and pay my entry the day of the race.

UC: What does it mean to you to have Brenda’s amazing support?

RK: It’s kind of like me supporting her except that she does all the work, and with skill.

UC: Would you be doing RAAM if she wasn’t with you?

RK: I would never have done RAAM if she weren’t with me. I grew nearly dependent on Brenda in high school and totally dependent on her shortly thereafter.

UC: How do you stay motivated to get through all the training and racing?

RK: It’s something to do. I used to surf a lot, but Brenda tells me that I don’t like salt water and that I’m afraid of sharks. I like to think of my bike as a glorified wheelchair.

UC: But what do you really get out of it Rob?

RK: I get some thick skin on my behind and three wooden maps of America.

UC: Have you ever been concerned with your safety while riding?

RK: Once, in 1988, as I was bouncing along the ground in front of a Mazda that had just shattered my carbon bike, I was concerned that I wouldn’t be able to regain enough altitude to avoid melding with the Mazda’s oil pan. Altitude became a moot point as the car came to a stop about the same time that I did.

UC: When you finally finish racing RAAM, how do you want people to remember what you’ve done?

RK: I’d like someday to remember that I won the last RAAM I entered. If I live too much longer, that’s probably the way I’ll remember it at the old folks home.

UC: Who has influenced you in your riding?

RK: Sometimes the Highway Patrol, but not that much.

UC: What skills do you like your Krew to have”

RK: Good drivers are a must. We’ve had bus drivers, an airline pilot and a nuclear submarine driver Lt. Commander.

UC: What do you expect of them during a race?

RK: I expect no one to kill another Krew member

UC: Do you have Krew problems like everyone else?

RK: One Krew member used to teach calculus, but if he presented me with a calculus problem during RAAM, it would just give me a headache.

UC: What does riding do for you?

UC: When you get right down to it Rob, why do you ride?

RK: Most of the good places to walk have fences around them.

UC: Do you have a favorite RAAM race?

RK: RAAM ’92. I led for the entire race except for some sleep breaks and one call from nature.

RK: Both ’85 & ’89. Each involved torn thigh muscles and demanded one-legged pedaling over some serious climbing.

UC: How about the toughest RAAM to finish?

RK: ’99. I totally lost the desire to finish while we were somewhere in TN. I didn’t like the way the race was unfolding and wanted no part of it. After I tried to quite twice, Brenda finally insisted that I finish.

UC: A most satisfying RAAM?

RK: ’95 when Danny and I went head to head in OK. He came back strong near the end and I barely held him off until I gained enough time for a 90 minute sleep break on the last night. He nearly caught me as I slept before I awoke to allow him to finish at his leisure nearly 7 hours after I crossed the line.

UC: What was it like to be a part of those classic rivalries with Bob Fourney and Danny Chew?

RK: During ’90 & ’91 I mostly thought of Fourney as a tool to help me ride faster., although, in ’91 I was very disappointed that I didn’t get there first. In ’92 I must have been overconfident as I felt like I owned him, but I did get there first. Danny and I split some good close races for first in ’95 & ’96. Maybe the most memorable but certainly the most recent was our race for second in ’01. That year, this flatlander had a chance to spank Danny on the big climb out of Flaming Gorge. I might have given him one of those Lance to Jan snarls, but how could I? He was wearing oven mitts for shoe covers and a gutted helmet shell over a wool hat.

UC: Got any good stories?

RK: The 20 mph Chihuahua. He was an attack dog through and through. Lucky me, I was able to reach speeds in excess of 20.1 to save myself.

As a heavy user of chewing gum, Krew members sometimes hand me gum so frequently that at night I just hold out my hand without looking. Once I was handed wet gum whose wetness went undetected until the chewing had begun. The Krew member claimed he had just loosened it up for me.

RK: I most liked the course the last three years. It had the least traffic and turns. It also had the best scenery. The courses that go through the big cities are my least favorite. The only thing worse than trying to race during rush hour with red lights and exhaust fumes is racing through a city at night beset by drunk drivers and criminals.

UC: Rob, Which climb was the most difficult in RAAM history for you?

RK: The climb to the second floor of the motel after the race.

UC: Congratulations on a RAAM career and, fortunately for RAAM, it isn’t over yet! When you do retire, you’ve got a great future in comedy.