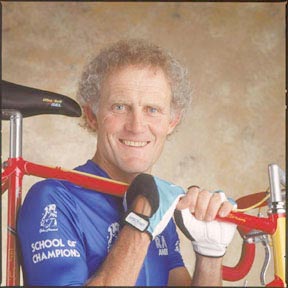 “John Howard was a lot better rider than me. The only way I could win was to have better organization and try to make up time when the weather conditions were bad.” — Lon Haldeman

A lifetime of bragging rights accompanies any one of those feats.

But one man, John Howard, has accomplished them all — and then some.

The “then some” would include Howard’s participation in the 1982 Great American Bike Race, precursor to Race Across AMerica. He came in second to Lon Haldeman that year with a time of 10 days, 10 hours and 59 minutes. But he was first in another category. Howard was RAAM’s first Rookie of the Year.

For his participation in the historic race that launched the sport of ultra cycling, as well as many other accomplishments, Howard has been named to the Ultra-Cycling Hall of Fame. It is third such distinction awarded the 57-year old Encinitas, Calif., resident. Howard is also a member of the U.S. Cycling Hall of Fame and the Triathlon Hall of Fame.

A native of Springfield, MO, Howard first became interested in cycling at the age of 15, riding the slopes around his home — the Ozark Mountains. In cycling, Howard wasn’t following in his father’s footsteps, those of Harry Howard, a high school football star. Rather he was blazing new territory. Go figure.

A common trait among these cyclists is tenacity, and it’s one Howard recognized in himself. “I’m a hard-headed fool from Missouri,” he said. “Once I sink my teeth in something, I don’t let go.”

A decade later, ultra cycling and Howard came together.

“Ultra-cycling came about after I won the (1981) Ironman World Championship in Hawaii,” Howard said. “John Marino and Mike Shermer and I were attending a bicycling expo in Cleveland in the winter of ’81.”

Marino proposed the idea of racing across the country, and Howard figured why not. He was certain he could outdistance both those men, but this “Lon Haldeman”, the fourth man to join the race, was an unknown.

“In retrospect I seriously underestimated his endurance,” Howard said. “He was a great competitor and deserved to win.”

Lon Haldeman never underestimated Howard. While Haldeman saw Michael Shermer and John Marino as competitors, it was Howard that posed the biggest threat.

“They all had their strengths, but Howard was the best cyclist,” Haldeman said. “He was a lot better rider than me. The only way I could win was to have better organization and try to make up time when the weather conditions were bad.”

And they were bad in 1982. Heat, rain and headwinds all took their toll on the four men looking to tag the Atlantic Ocean first.

“If I look back at the race statistics, I was able to increase my lead the most during the worst riding conditions. I am sure if John Howard raced again he would have been a day faster because he would have a better idea of the logistics involved in a race across the country.”

That experience schooled Howard in lessons of self-discovery, a tutorage that would prove important later in his athletic career. While he considered returning to the cross-country bike race he decided to focus on the 24-hour paced record. ” I made three attempts at this and finally managed 539 miles in Clearwater, FL, in June of ’87,”; he said. In between he raced the Spenco 500 twice and numerous John Marino Opens in preparation.

In terms of personal achievements, he said the 24-hour record and the co-founding of RAAM are his proudest achievements.

“When I was doing them (ultras), I was in an intense period of personal athletic exploration, and ultras served that end well,” Howard said.

While he is still highly competitive and works with cyclists, skiers and speed skaters through his coaching service, John Howard Performance Sports, his body is not happy doing distance anymore. “Cycling is minimal, but I’m planning a return to top category racing next season,” he said.

When he does get out on the bike, he enjoys the roads leading out of North County and San Diego. And also, still, the Ozarks.

“Nostalgia means a lot to me these days and I love riding the primitive vintage bikes from the ‘;50s and ’60s with a tube slung around my back like those early tour riders before racing became a blood sport,” he said.

But don’t let that nostalgia line fool you. He still has a cycling goal up his sleeve.

“I want to experience much more of a branch of the sport that has not yet arrived,” Howard said. “I want to throw away my helmet and explore the incredible waterways of America. My brother builds a beautiful water cycling craft that is faster than a kayak and a real gas to pedal.” (Oh yes, Howard set the American Canoe Association’s World 24-hour record in one of his brother’s long boats in 2000.)

“We are still planning a bike trip across the Bermuda Triangle, that might be my swan song,” he said.

“I plan to continue doing what I enjoy, coaching and reflecting on what it takes to bring athletes and myself to continually higher levels of personal performance and growth.”

While he takes a “been there, done that” approach to RAAM, he does appreciate and applaud the men and women who have followed in those tire tracks in their journey of self-discovery.

“I’d say the most gratifying part of my life at this juncture is that I have bottled up all that is important about winning races and love sharing it with a few highly motivated clients,” Howard said. Since 1982 he has gather more than 140 national championships and no less than 20 world title cyclists. He is proud of those people. And he is proud of what he has been able to accomplish in the sport.

“Cycling has occupied a good portion of my life and it has provided me with vast opportunities to travel worldwide. On a broad scale of importance I would say it has been educational.”

John Howard is the author of “The Cyclists Companion”, “Multi-Fitness” and “Pushing the Limits and Dirt.”