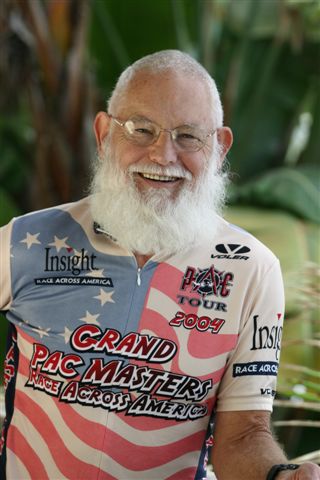 Just ask anyone of the more than 5,000 riders who has finished one of the California Triple Crown double centuries. Chuck Bramwell, director of the California Triple Crown says ” over 90% of those riders have seen Lee’s Bikevan roving those courses … helping those folks accomplish something they would have never dreamed to be possible. His impact has been huge in the lives of thousands!!”

As a cyclist, Lee has a long history that very few people know about. He tackled his first double century in 1975 on the Davis Double course. Since then he has ridden over 20 doubles, three triple centuries and a quad century – the first rider to do back to back Davis Doubles (400 miles)! He is a three-time finisher of the Terrible Two, one of the toughest doubles in America.

In 1985, Lee was in a legendary group and rode in Lon Haldeman and Susan Notorangelo’s RapiTour, crossing America in 14 days while averaging over 200 miles a day. These folks were making long distance history that year.

Lee then crewed for Susan on her record-setting RAAM ’89 win. He learned much from Lon and Susan, which he then put to use helping other racers.

Susan Notorangelo: “Lee Mitchell has given the ultramarathon cycling community his heart and soul. Lee was one of the original PACTour riders in 1985! Not only is he in the records book for his many RAAM accomplishments, he has devoted much of his time so that others can compete. He crewed for me in my last RAAM, as one of only six crewmembers. His enthusiasm could get me going in the morning and keep me motivated to ride extra miles into the deepest darkness.

“His years of dedication to the sport, whether racing or driving support squarely places him in the WUCA Hall of Fame. Cheers to Lee!!”

Fuzzy’s RAAM van is famous. It’s known for its efficiency. The coolers are accessible and the electronics are hidden. There’s room for a rider cot behind the driver, which doubles as a table. The supplies are stored in stacked, foldable milk crates that are accessible from the rear door. Everything with a place and everything in it. Need a flashlight, pencil, extra map, or a screw for your glasses? Lee’s got it. All problems solved.

Lee said: “It was wonderful to crew for Gerry Tatrai when he won in 1993. It’s not always in the winning though. I am so happy when anyone finishes a race. You can be an excellent crew person for the last place finisher and still be rewarded with a tremendous sense of satisfaction.”

“If you want to be successful as a crew person, having a good attitude is imperative. Oh, and having a private water bottle, toothbrush and deodorant are a big plus. You must have the ability to get along with others for 10 days in stinking, food deprived and stressful conditions. You need to cope with chaos, particularly at the start.”

When things inevitably get tough, “I just remind myself that I would rather help this rider finish more than anything else. I can sleep, shower and eat well when the race is over. If you expect that your rider will win, or even be competitive, you’ll likely be disappointed.”

“You can be an excellent crew person for the last place finisher and still be rewarded with a tremendous sense of satisfaction.”

After years of crewing, Lee and three friends from RapiTour formed Team PAC Masters to compete in the 60+ division in RAAM ’95.

Teammate Victor Gallo: “I met Lee for the first time on the RapiTour of 1985 and he impressed me as a strong rider with a very upbeat attitude. I later saw him crewing for RAAM and he always looked very professional and strong willed, an individual dedicated to bring the best to the ultra-endurance athletes.”

Bob Kash was a rookie crew person for the PAC Masters in RAAM ’95. He recalls: “Fuzzy displayed unlimited patience in answering this rookie’s many questions, even though he was a rider. He explained his answers in detail so that I could understand. Crewing with him in later races he demonstrated the leadership and crew and management of equipment that is essential in keeping everyone focused and on task.”

In 2004 Bob raced on the Grand PAC Masters. He continues: ” I have great respect for Fuzz as a person, a crew chief, a teammate, and a very close friend. I am anxious and delighted to see him and race with him as a teammate in 2005 in the Race Across Oregon.”

Lee lives in Woodland, CA. He gets “paid to be a Community College teacher in Geography, Geology, Anthropology, Ecology and Oceanography. I’m not a specialist in any though.” After his Team RAAM in ’95 he’s gotten his Ph.D. in sagging, crewing and night time RAAM driving.

Lee has supported virtually all of the Davis Bike Club brevets driving all day and all night many times. Daryn Dodge, the Davis, CA brevet administrator says: “I find it truly amazing that he keeps all his weekends open in order to help cyclists meet their goals…and without ever asking for anything in return! A wonderful, unselfish, committed volunteer in which the only limitation seems to be he needs to sleep occasionally during his hour-after-hour support on the brevet courses. Having his help always puts cyclists at ease knowing he is out there somewhere to take care of them, and puts me at ease knowing he is on the course and knows how to take care of cyclists in need.”

Chris Kostman: “Lee is booked up years in advance for the 508 as the crew chief of choice for one lucky entrant each year.” At Furnace Creek in 1998 Chris presented Lee Mitchell with a 508 hammer, inscribed: “The 1998 Furnace Creek 508 was proudly dedicated to Lee Maggot Mitchell. Chris said: “He deserves an award every year for all that he does.”

Chris comments “If there’s one constant in the sport of ultramarathon cycling in the great state of California, it’s the congenial, ever-prepared, ever-helpful omnipresence of Lee Mitchell and his world famous red SAG vehicle with ‘BIKEVAN’ license plates and motivational music pumping from the roof speakers. While continually refusing any financial reimbursement for any of his many expenses, Lee shows up to support dozens of cycling events across the state, year in and year out. His van carries tyres, tubes, and wheels in every conceivable size, every part any bike would ever need, and even an array of cycling shoes and cleats (not to mention tampons in three sizes; the guy thinks of everything). If I had a dollar for every time he’s ‘saved the day’ for a cyclist, I could sponsor RAAM! ”

In 1999 the Davis Double Century was dedicated to Lee and in 2000 Lee was inducted into the California Triple Crown Hall of Fame.

After nine years in retirement from racing, Lee pumped up his tires in 2004. He and the Grand PAC Masters raced Team RAAM and finished in 7d 16h 31m to establish a new 70+ four-person team average speed record of 16.03 mph crushing the old record of 14.6 mph. Of the three category records broken this year, this one shaved off the most time: an amazing 18 hours and seven minutes faster.

Teammate Chris Stauffer: “Lee is the only 70-year old I know who can go from couch potato to world class athlete in seven months – he did it for Team RAAM ’04. Lee is also the most generous person I know with his time and equipment when he crews for other riders. I’m proud to be his friend and teammate!”

Lee’s teammate, Ron Bell: “In 1985 at the start of RapiTour I met a smiling fella with a white fuzzy beard and a windscreen on his bike. He rode like the wind.”

“Twenty years later after being his teammate on two winning RAAMs and a crew mate on several other events – he’s still smiling and riding like the wind, only the windscreen is gone and the beard is longer.”

“That’s Lee ‘Fuzzy’ Mitchell a real all-star in our sport!”

Lee’s own words could be used as the crew oath; “I am crewing to help someone succeed in something extremely physically and mentally difficult. I will endure rain, cold, lack of showers and all discomfort until the finish. I will fix any mistakes, do whatever it takes and continue to the end.”

Lee was inducted into the hall-of-fame in 2004.