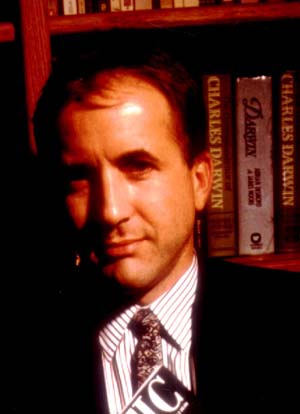 “With ultra-cycling you REALLY get to go places. It’s an adventure. You learn more about yourself, both body and mind.”

Looking back over his life, Michael B. Shermer is proud of multiple things. He’s proud of his daughter, Devin Ziel Shermer, 13, and his wife, Kim Ziel Shermer. He’s proud of the 12 books he his written and the science publication, Skeptic Magazine he started.

And he’s proud of Race Across AMerica, an event he co-created in 1982 originally known as The Great American Bike Race. And it is for this reason that Shermer has been inducted into the Ultra Cycling Hall of Fame.

Back then there were only four crazy guys willing to risk life and limb in a flat out race across the country on bicycles. Those men, Lon Haldeman, John Howard, John Marino and Shermer would make the crossing in 12 days and under.

Now it’s an annual event involving more than 100 cyclists. Shermer, though, has the distinction of being one of the first. Or the third, depending on how you look at it. Because in 1982 Shermer finished behind Lon Haldeman and John Howard with a time of 10 days, 19 hours and 54 minutes. In that historic race, he rode an all-aluminum Vitrus from Motobecane called the Prolite outfitted with a new-fangled contraption called a “bike computer.”

Shermer documented his Race Across AMerica experience, and the experiences of others, in several books including “Race Across AMerica: The Glory and Agony of the World’s Longest and Cruelest Bicycle Race” (1993, WRS Publishing), “The Woman Cyclist” with Elaine Mariolle (1988, Chicago Contemporary Books) and “The Race Across America Book” with John Marino and Lon Haldeman (1988, San Clemente Info Net Publishing).

Shermer continues to cite Marino as the most influential person in his cycling career, as it was his pal that got him into cycling. While physically active prior to taking up cycling, the sport he remembers playing with any consistency was baseball.

“John Marino taught me excellence in athletics and life. He demonstrated what hard work can accomplish,” Shermer said.

“John Marino taught me excellence in athletics and life.”

Following the Great American Bike Race of 1982, Shermer would go on to complete two more transcontinental crossings, one in 1984, when he got fourth, and another in 1985, when he got third. “RAAM 1985 was the best I could do. I didn’t need to prove myself any longer,” Shermer said. That year he finished the 3,150 race in 10 days, seven hours. In 1989 he retired from professional racing following, what he said, was the worst cycling experience of his life. 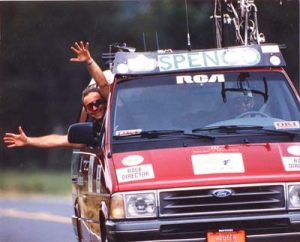 “It was 1989 and Team RAAM,” Shermer said. The mutual meltdown of the team HPV members forced a DNF on the side of the road in Pennsylvania, 2,970 miles into the event. “There was nothing wrong with our bodies. We were whipped psychologically, plain and simple. It was very disappointing.” Looking back, Shermer recognizes his professionally cycling career belonged to someone with few life responsibilities than he has today. “I was single back then and I had a lot of free time,” said Shermer. “It’s a good gig if you can get it.”

“Shermer never had to finish first at RAAM to know he had done something pretty special.”

What particularly attracted him to the sport at the time was the fact that, unlike running, “you get to go places.” And with ultra-cycling “you REALLY get to go places. It’s an adventure. You learn more about yourself, both body and mind.” Shermer never had to finish first at RAAM to know he had done something pretty special. Completing the journey just once made him realize if he could do that, he could do anything.

That outlook has taken him far. Shermer’s distinguished accomplishments are many. A PhD in the History of Science from Claremont Graduate School, Shermer is the author of such books as “Why People Believe Weird Things: Pseudoscience, Superstitions and Other Confusions of Our Time” (1997,W.H. Freeman) and “The Science of Good and Evil: Why People Cheat, Gossip, Share, Care and Follow the Golden Rule” (2004, Henry Holt/Times Books).

He is founding publisher of Skeptic Magazine, a science/education-based publication that presents and explores viewpoints on controversial ideas and claims, and director of the Skeptic’s Society.