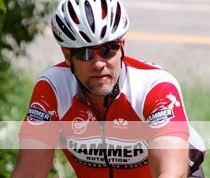 “I absolutely love crewing and I derive as much satisfaction from helping other ultra cyclists reach their goals as I do achieving mine.” 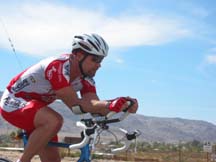 I… Am.. Toast
Born racing at the Double Furnace Creek 508. Jeff Martin photo

Talk about someone who is totally consumed with ultracycling. Steve Born (45), from Whitefish, MT, has been in the forefront of long distance cycling for over 15 years. His list of cycling accomplishments is beyond impressive. So much so, that this year he received the ultimate honor by being voted into the Ultra Cycling Hall of Fame.

Born exemplifies the ultracyclist – in addition to a stellar racing career, he has crewed in eight RAAMs and three Furnace Creek 508s, and has officiated in two RAAMs and several RAAM qualifiers. Born has ridden in several PAC Tours, Pacific Crest Tours, and Red Rocks Tours.

He also supports the sport with his wealth of knowledge about nutrition, working with and providing advice to many riders, including several RAAM riders. Professionally he supports a large number of ultra cycling races throughout the U.S. via his employment with the E-CAPS/Hammer Nutrition company.

Born has been a member of the WUCA for over a decade and currently serves on the Board of Directors of the WUCA, Inc.

The UltraCycling Hall of Fame honors those riders whose lifetime accomplishments best exemplify the spirit of the sport. The honoree is an excellent rider, demonstrates consideration for and helpfulness of other riders, and is an exemplar of the sport. In addition to cycling accomplishments, a person’s leadership in the sport, and participation in officiating, crewing and coaching activities are considered.

Born said: “I humbly accept this wonderful award, sharing the honor with those who were nominated with me. With that in mind, I accept this award in recognition of my own achievements in, and contributions to, the sport I love so much and have devoted a big part of my life to. In accepting the award, I also honor the sport and the other athletes who were nominated with me.

Born said: “I humbly accept this wonderful award, sharing the honor with those who were nominated with me. With that in mind, I accept this award in recognition of my own achievements in, and contributions to, the sport I love so much and have devoted a big part of my life to. In accepting the award, I also honor the sport and the other athletes who were nominated with me.

“I really appreciate all that the WUCA and Perimeter Bicycling are doing to build the sport. I’m genuinely flattered that our members think of me as a role model and my hope is to give back as much as I’ve gotten out of the sport. Finally, while a ‘Hall of Fame induction’ might be construed as ‘being retired’ that’s far from being the case. I have some ambitious plans over the next several seasons and am looking forward to breaking new barriers in the sport. ”
In between races he’s crewed on eight RAAMs and three Furnace Creek 508s. “I absolutely love crewing and I derive as much satisfaction from helping other ultra cyclists reach their goals as I do achieving mine. ” He’s officiated in two RAAMs, the Race Across Oregon, and several Furnace Creek 508s.

“I saw a photo of Pete Penseyres riding through the desert in RAAM ’86 and I thought, ‘That’s it. “ 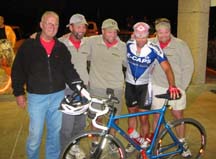 Finish of the Double 508

Steve started out in cycling like many of us. “For a long time I had been riding my bike simply for the joy of riding, doing long rides (or at least I thought they were long). I commuted to and from work each day, which at that time was about 35-40 miles each way. I was getting fit and wanted to do some a race to gauge my fitness. I saw a photo of Pete Penseyres riding through the desert in RAAM ’86 and I thought, ‘That’s it. This guy’s doing something very few people could ever say they did and even if I never became good enough to do that race it would still be a great challenge and one worth striving for.’ That’s when I decided to give ultra cycling a try. ”

“I did my first double century in the summer of 1987 and competed in the RAAM Open West in October of that year. I had never been in a bike race before and that double century I did over the summer was the longest ride I had done to that point. Remarkably though, I had a really good race in Arizona, finishing second to Kirk Freeman. I was hooked. ”

The Furnace Creek 508 is one of our sports toughest races, especially with its 30,000 feet of climbing, but Steve decided to put a record out there may stand for quite awhile. In October 2002, he started at the finish line in 29 Palms California, rode the course backwards, caught a few short hours sleep, then joined the official race from the beginning. “The Double 508 is something that I’m really proud of. There’s something special about it that’s impossible to describe. My friend Mike Wilson put it into perspective when he said ‘Do you know that you basically did 1/3 of RAAM with all the climbing of a RAAM, on a half night’s sleep?’ When I thought about it I was blown away. It is the highlight of my career thus far. The Double 508 will always be the most special for many reasons. It was harder than I could have imagined. However, my crew and I were in perfect sync, things went so smoothly the entire race, and I felt really good most of the time. Everything clicked. In addition, the other riders and crews on the second half of the double were so gracious and motivating, which helped tremendously. Still, this was an enormous challenge and so incredibly difficult; finishing was nothing short of surreal. ”

“The other riders and crews on the second half of the double 508 were so gracious and motivating, which helped tremendously. “

Steve’s cross Texas record ride was also one of his favorites. ” The Texas record was a lot of fun. My Dad and brother Dave were great crew. Ed Fleming and Lanie Smith were awesome officials – we all had a lot of fun out there. I went faster than I ever thought I could over such a long distance; a nearly 17.8 mph average for 574 miles. I really had no choice but to go ‘all or nothing’ since the route I was on was something like 40 miles longer than the one the record was set on. The time I had to beat was solid. I’m really pleased with that effort.” Not only did Steve ride 40 miles further than the previous record, but he beat that old mark by over three hours. It’s even more impressive when you consider that the first half of the ride was plowing through a 20 mph head wind.

For every good ride or race, as we all know, there are others that we’d just as soon forget. For Steve it was RAAM ’98. “It was not a very pleasant experience. The weather that year was awful. It was unbelievably hot all day and all night for most of the country. In many ways RAAM that year felt like a death march. In fact, one person called it ‘The Nightmare from Hell.’ The field was so strong that year that I had to push myself much harder and on less sleep than ever before just to stay competitive. It really took a toll on me. As a result, I was not very much fun to crew for that year. To put it mildly, I was a pain in the ass a lot of the time. That’s one of those times in my life that I wish I could go back and change because I was so hard on my friends and family that were on my crew that year. ”

Steve’s training schedule is grueling, to say the least. “I used to do lots of long miles early in my career, something to the effect of 800-900 a week. Now I focus more on quality over quantity. Rarely do I ride in excess of 450-500 miles a week. I consult with John Hughes frequently to get his advice and opinion on what I’m doing in training. I try to make sure to keep a lot of variety in my training – intervals, speed work, time trials, long rides, hill work. I make sure my short workouts are ones that are wicked hard. I still do rides up to and slightly over 200 miles and try to throw in back-to-back doubles in my training. I haven’t done 24-hour training rides in years. I already know what being in the saddle for that long is going to feel like. In the winter I get in the gym and do a lot of strength work and of course I do a lot of Nordic skiing for cross training. Minute for minute, Nordic skiing is the best workout there is. 30 minutes on skis is easily worth 60-90 minutes on the bike. ”

Steve’s family has always been a very important part of his life. “D.C. and Rita are my parents and the two greatest people I’ve ever known. I have three brothers, Jeff, Dave, and Mark, and two sisters, Chris and Kathryn. We’re a very tight-knit family and they’ve all been very supportive of my cycling endeavors. Another plus with having a large family is that it made it easy to find crew members!” D.C. has actually written two books that have been published about Steve’s ultra riding; Release the Pace Giraffe and The Part-Empty Box.

Steve currently works for E-CAPS/Hammer Nutrition as their Senior Technical Advisor. He is in charge of the events promotions, helps with all the other marketing projects, and is the editor of the newsletter. E-Caps/Hammer Nutrition is one of Steve’s long time sponsors, along with Kestrel bikes, Zipp Wheels, Platinum Performance and Smith Sport Optics.

What’s up next for Steve? “I want to continue to help the sport through my involvement in the WUCA. I’d also like to help with RAAM to make it more visible and to get more riders in that race. I’d like to do the Race Across Oregon soon. The state records are also a lot of fun and I’ve got my eye on a couple for 2004. Also, I want to do a Double Transcontinental within the next 3-5 years. I look at the two great athletes who have accomplished that, Lon Haldeman and Bob Breedlove . I think that would be excellent company to be in. ”

Ultracycling usually affects most of us positively in some way and Steve is no exception. “No one may believe this but I was extremely shy and reserved before I started riding ultras. Testing myself and seeing some success in the sport has bolstered my self confidence greatly over the years. In life, I’ve come to trust in God’s love and grace. On the bike, I often reflect on what Michael Secrest said, ‘Success doesn’t necessarily mean winning all the time. Success is having the courage to face your fears and still having the guts to go on. ‘ ”